TODDLER HITTING: 5 STRATEGIES TO HANDLE IT

Does your child use hitting as a way to express displeasure? Do they smack other kids on the playground? Do they hit you if they don’t get what they want? 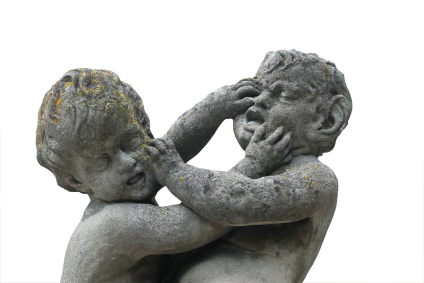 This is natural and normal behaviour for children who do not always have the words or the skills to handle difficult situations. Toddlers and preschoolers will often respond physically to situations that upset them because they have not yet learned other ways to respond. In this post, I’ll share some ideas for dealing with hitting in toddlers.

The first thing that I do is to stop the hitting. As gently as possible, I will hold my child’s hands and look her in the eye and explain in as few words as possible that we do not hit. A child who is angry and lashing out is not likely to listen to a long philosophical explanation of why physical violence is wrong, so I keep it simple.

Depending on the situation, I may also remove her. If she hit me or another child and is able to calm down immediately, then I wouldn’t remove her. However, if she continues to lash out at me or at someone else, then I would pick her up calmly and take her somewhere else before dealing with the situation further. I have left playgrounds, stores, restaurants, and parties with children who could not calm down until they were outside of the situation.

The other benefit of removing your child is that you aren’t having to deal with the situation directly under the eyes of everyone else who was witnessing it. I hate disciplining my children in public because I find myself making choices based on what would look right rather than what is the best thing to do.

2. Give Your Child’s Feelings Words

If a child is hitting or kicking, there is a reason that they are doing so. That doesn’t mean that it is okay for them to hit, but it is important to validate their feelings. I don’t always do that in the heat of the moment, because I find that they are not usually ready to listen at that point. However, once things have settled down, I will try to talk to them and mirror their feelings back to them in words. I will try to express what was making them angry and ensure that they know that I understand that. I will help them to find words that they can use next time instead of hitting.

With non-verbal toddlers, it is hard to tell whether it is their lack of maturity or lack of words that is causing them to lash out. Last year, when we were in Berlin for the summer with our kids, I noticed my 3 year old was hitting kids on the playground more often than she usually did at home. She was also grabbing toys away from them. I realized quickly that she was simply lacking the words to say “stop that” or “please move” or “can I play with you”. Once we gave her the few key phrases she needed in German and practiced them with her, she was fine. With toddlers that are just learning to talk, it may be worth practicing phrases that they can use instead of hitting.

Some natural parenting “experts” claim that hitting or other violent outbursts are always related to unmet needs. I don’t think it is necessarily true that they always relate to unmet needs, however I do think that is frequently the case. Kids may hit to get attention, because they are hungry or tired, because they feel that they are not being listened to (by you, by other children), or simply because they feel like they have too little control over their own lives. If my child has started hitting more often, I try to figure out which of those needs isn’t being met. Often they will not know it themselves. They just know that they are feeling off and end up lashing out as a result.

Sometimes hitting comes from parents telling kids what to do and not giving them any options. If parents give children more control, they should be less likely to lash out. Instead of asking my kids to do something, I prefer to tell them what to do, but provide options. So, instead of saying “would you like to put your shoes on now?”, I’ll say “It is time to put your shoes on. Would you like to wear the red ones or the blue ones?”

In terms of other needs, I try to figure out what they are and meet them. If they are tired or hungry, then maybe we need to shift gears for a snack, nap or relaxing activity. Maybe the day has just been too busy. If they are not getting enough attention, then maybe some special one-on-one time is needed to reconnect.

4. Give Them Alternatives to Hitting

Some kids hit because they don’t know what else to do. They are angry or feel like they have been treated unfairly and don’t know what to do about it, so they hit. I try to teach my kids alternatives to hitting. This can include:

This probably goes without saying for most of the readers of this blog, but hitting teaches hitting. It is pretty hard to teach a child not to hit if you are hitting them. A lot of parents seem to think it is okay to spank their child when the child isn’t behaving the way they want them to, but then they expect their child not to hit anyone. Or, parents respond to hitting with more hitting, which may appear to “work” in the moment, but in the long-term just teaches the idea that the person who can hit the hardest wins. Modeling gentle responses and teaching our children how to handle difficult situations without resorting to hitting is the best thing we can do in the long-term to teach them that physical violence is not only wrong and disrespectful, but also unnecessary. I remind my children regularly, both when they have just hit me or someone else, as well as on peaceful occasions, that it is never okay for them to hit someone else and it is never okay for someone else to hit them.